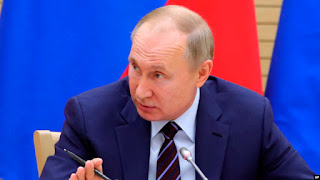 "The Prime Minister met President Putin in the margins of the Berlin Conference on Libya. He was clear there had been no change in the UK’s position on Salisbury, which was a reckless use of chemical weapons and a brazen attempt to murder innocent people on UK soil. He said that such an attack must not be repeated", the 10 Downing Street statement read.

Johnson remarked that both the UK and Russia "had a responsibility to address issues of international security including Libya, Syria, Iraq and Iran".
On 4 March 2018, Sergei Skripal and his daughter, Yulia, were found unconscious on a bench near a shopping centre in the UK's Salisbury. London has claimed they were poisoned with a military-grade nerve agent called A234 and accused Moscow of staging the attack, which provoked a huge international scandal. London has also said that it suspects Russian nationals Alexander Petrov and Ruslan Boshirov, who the government claims work for Russian intelligence, of carrying out the attack
Moscow has categorically dismissed the accusations, pointing to the absence of any evidence and London’s rejection of its requests to cooperate in investigation and grant access to the poisoned Russian citizens. Petrov and Boshirov denied their involvement in the attack in an interview with the RT broadcaster, saying that they had visited Salisbury for tourism purposes and actually worked in the fitness industry