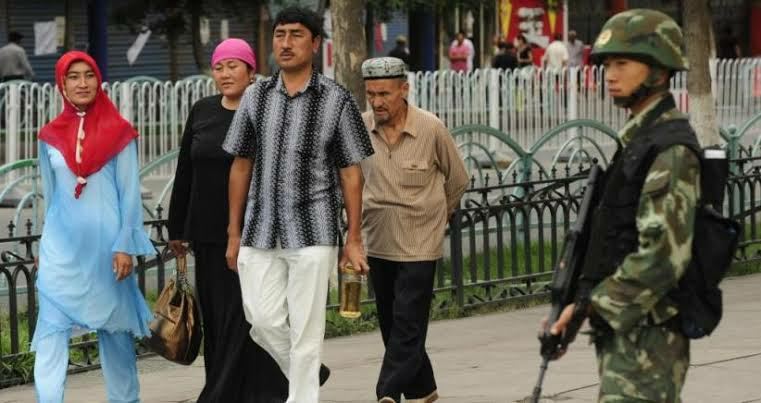 As U.S. and China trade representatives prepare for what is billed as a concrete first step toward a trade deal in mid-January, Florida Senator Marco Rubio, a Republican, suggests that China shouldn't be let off the hook just yet, citing ongoing human rights abuses against Muslim minorities in the region.

Rubio told CBS News' "Face the Nation" Sunday that despite progress on trade, he supports sanctioning top officials in Beijing over the mass roundup of Uighurs into what the Pentagon has called "concentrations camps."

"Should there now be room cleared for the U.S. to sanction Beijing's leaders for some of those human rights abuses?" "Face the Nation" moderator Margaret Brennan asked.

"Absolutely," Rubio responded. "I will never accept the notion that somehow in order to be able to sell them more things, we have to look the other way on some of the grotesque human rights violations that we're seeing systemized on their part, both in the Qinghai province throughout China in general, but also in places like Hong Kong, as well."

The Republican senator has long been critical of China's human rights record, condemning the country for its mass incarceration of Uighur Muslims. Rubio had previously raised the possibility of imposing sanctions on Chinese officials under the 2016 Global Magnitsky Act in April 2018, asking the U.S. ambassador to Beijing, Terry Branstad, to visit the region and collect information on Xinjiang officials responsible for the mass detention policy.

"The Chinese Government and Communist Party is working to systematically wipe out the ethnic and cultural identities of Uighurs and other Muslim minorities in Xinjiang," Rubio commented in December.

On Sunday, Rubio commended the action taken by the House last month to pass its amended Uighur Human Rights Policy Act, which aims to pressure China over its brutal mass crackdown on ethnic Muslims in the far west of the country. The legislation follows a similar measure over human rights abuses in Hong Kong that angered the Chinese government.

The Uighur bill condemns the detention of more than one million Uighurs, Kazakhs and other minorities in so-called reeducation camps, where they are subjected to political indoctrination, torture, beatings, and food deprivation, as well as denial of religious and linguistic freedom.

If signed into law, the measure would require the State Department to evaluate whether Chinese officials meet the criteria for sanctions for their roles in the crackdown in the Xinjian region.

Rubio along with New Jersey Senator Bob Menendez, a Democrat, first introduced the Senate version in November 2018 after pushing the Trump administration to impose sanctions, including asset freezes and visa bans, on Chinese officials and companies tied to a stifling security crackdown and the mass internment of ethnic minority Muslims in camps in the far western region of China.

While Vice President Mike Pence, Secretary of State Mike Pompeo and officials from the Pentagon and CIA have all voiced condemnation of China's treatment of its Muslim minorities, President Trump has mostly remained silent on the issue. Last year, however, he invited a Uighur Muslim, Jewher Ilham, to meet him at the Oval office.

Ilham told Mr. Trump she hasn't seen her father, a well-known Uighur scholar, since 2013, and said that up to 3 million people are being held in the detention camps camps. Mr. Trump called the treatment of the Uighurs "tough stuff."

The administration also quietly appointed a Uighur American academic to a leading role on China policy within the White House national security council, though its policy toward Uighurs remains unclear.

Rubio, however, appears undeterred by the lack of attention to the issue at the White House and on Capitol Hill.

"I hope we can get a deal done with the House," he told CBS. He added: "They passed a version of a Uighur human rights bill. We have our version. They're pretty close, so we can get something done and signed."

Rubio is slated to unveil the Congressional-Executive Commission on China's (CECC) annual report on human rights conditions Wednesday alongside Massachusetts Representative James McGovern, which will show China's increased efforts to "sinicize" religion — making religion compatible with the Communist Party's control and concept of what it means to be Chinese, according to staffers who spoke on background on the forthcoming report. McGovern and Rubio currently serve as chair and co-chair of the bipartisan commission.

According to a commission source, the report will argue that the protection of religious freedom and a U.S.-China trade deal go "hand in hand." But it will also point out China's efforts to "brutally dismantle" religious groups and organizations in the region in what it describes as a "compendium of the deterioration of human rights" in China.

The commission is expected to now push ahead with more legislation focusing on forced labor issues in the cotton and garment industries of Xinjian amid reports that religious minorities are being moved from mass internment to forced-labor camps.

Progress on trade with China has effectively opened the door for the administration to act on human rights-related issues, Rubio argues. But he still maintains that U.S.-China trade relations are to be viewed as "separate" from action on China's continued "human rights and geopolitical issues."

"The trade issues with China are not going to be the subject of one deal. This is a major reordering of our relationship to try to bring some balance and symmetry to it," Rubio told CBS.

He added, "I will continue to work on that front because I don't think the two issues are related."

Just before the new year, the president announced he would sign a "Phase One" trade deal with China on January 15 and plans to travel to Beijing for negotiations on the next phase of the agreement, which would bring a close to the nearly two-year-long trade war